The artists in this exhibition, Jenny Balisle, Kristine Mays, Maria de Los Angeles, Priscilla Otani, and Robin Bernstein observe contemporary events and use art, writing and social media to bring awareness to issues that they are passionate about. We have just lived through an extraordinary time and transition in our country - from the first Black president Barack Obama, through the experiment of trumpism, to the hard-won election of President Joe Biden and Vice-President Kamala Harris, who made history as the first woman, the first Black person, and the first person of Asian descent elected as vice-president.

Through all of these transitions, artists have responded, protested, marched, published, composed, performed, and fabricated works of art. Their artworks show concern, anxiety, courage, passion, and the belief that through meaningful engagement and action, they can effect real change. And, in each of these artworks, the broader issues are seen through the personal narratives of the individual artists. They allow us to view recent events through the unique lens of creative expression and artistic activism.

As I was putting together the images and words for this exhibition, I was reminded of the powerful video by Sara Bareilles, as Barack Obama was leaving office, and how prescient and true it still is today: 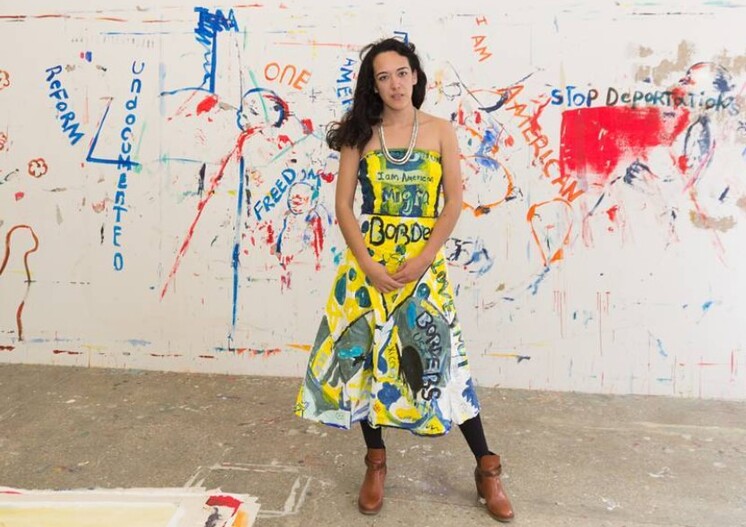 "I want to capture the contemporary life of individuals, creating images that are a type of social commentary on larger issues, such as immigration, politics, and ethical dilemmas."
Maria de Los Angeles
Maria's recent paintings and drawings reflect her concern for immigrants and families affected by the ICE detention centers. The work draws from her personal history as an undocumented immigrant, DACA recipient, Dreamer, activist and organizer.

"At the center of each is a mother and child, in my thoughts especially those in detention centers or separated from their children at the border between the United States and Mexico. I like the concept of the embrace, and often have a mother holding a child or young person, while helicopters circle around them, as small characters who could be ICE agents or border patrols arrive. I’ve included the landscape or garden as a setting, and show a series of figures running while holding hands. These are a metaphor for migration, and also for the circle of life and basic humanity. They are skeletons, but don’t necessarily mean darkness, but are a way for me to talk about joy, life, death, ancestors, transition, movement, journey, and basic humanity. They contrast with the center figures who, held together by embrace, evoke a feeling of serenity, love and lasting peace."
Excerpt from Artists on Coping: Maria de Los Angeles
Catherine Kirkpatrick. Art Spiel, May 8, 2020 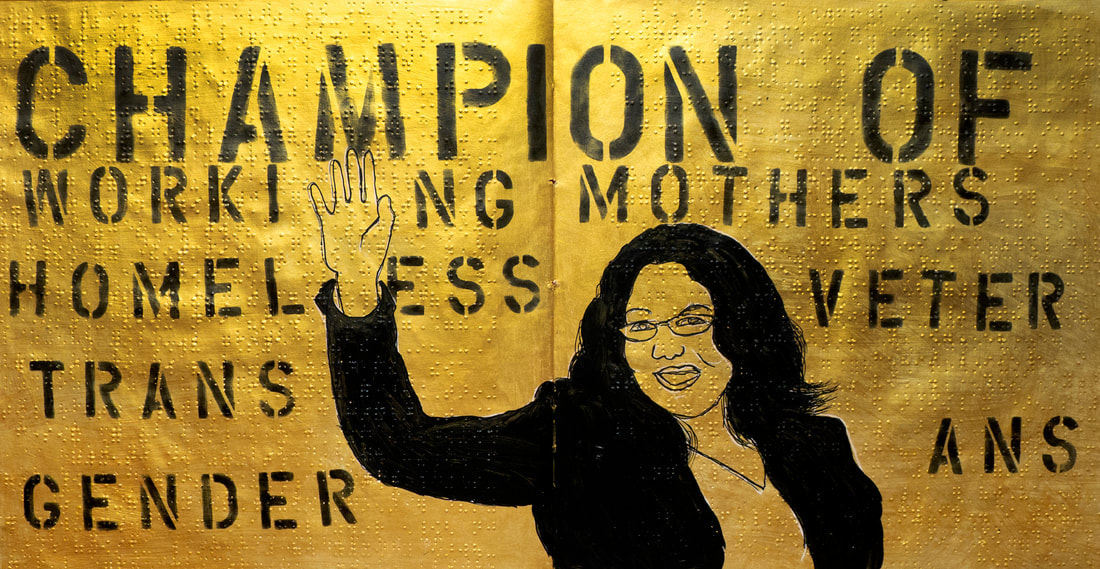 Her recent series explores both the lows of partisan politics and the highs of women in politics. Her Tammy Duckworth artist book is a portrait of a true American hero:

Duckworth represents the demographics of what our country is becoming today: mixed race, non-Caucasian, beneficiary of government assistance and realizing her American Dream because of it, hard-working and determined to work through Congress to better the lives of military veterans, working mothers, victims of gun violence, and transgender people, among other things. She is what America already is and continues to become: a representative of the demographic that puts fear into the hearts of politicians like Mitch McConnell, Lindsay Graham and Donald J. Trump.
​-Priscilla Otani

​Just as Kristine's sculpture contains a message of hope, we heard youth poet laureate Amanda Gorman reading her poem "The Hill We Climb" during the inauguration of President Joe Biden. As she recited her poem – capturing the angst of post-January 6 insurrection in Washington DC – she was wearing a Caged Bird ring given to her by Oprah designed in honor of Maya Angelou. 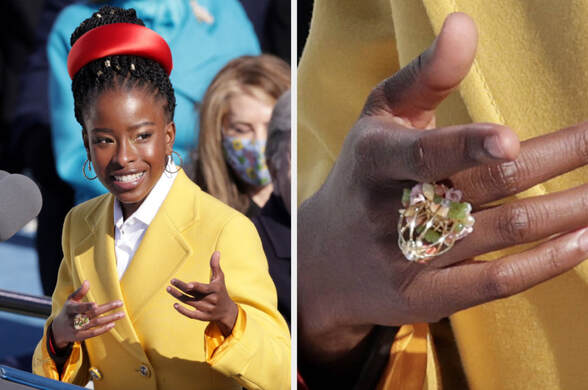 This online exhibition also includes a focus on the artists’ Instagram and Facebook posts over the past five years, through shifting social and political upheavals. Their online posts mark certain points in the historic timeline, highlighting events like the Women’s March in Washington DC, anti-Semitism and white supremacy riots, school shootings and gun control, Black Lives Matter and police brutality protests, ICE and the Immigration Enforcement detention centers,  just to name a few. Their artworks document troubling times, but also the resiliency of the American spirit.

We have seen how social media, like Facebook and Twitter, have the power to influence politics and social issues. They can be tools for awareness, activism and change, but they can also be used as weapons to incite violence and disseminate conspiracy theories, distorted information and lies. Freedom of expression is a fundamental human right, but along with the right to free speech comes the responsibility to be educated and informed about issues. As educators and students, our community is ideally positioned to engage in a dialogue around issues that are meaningful, and to build a strong foundation for the truth.