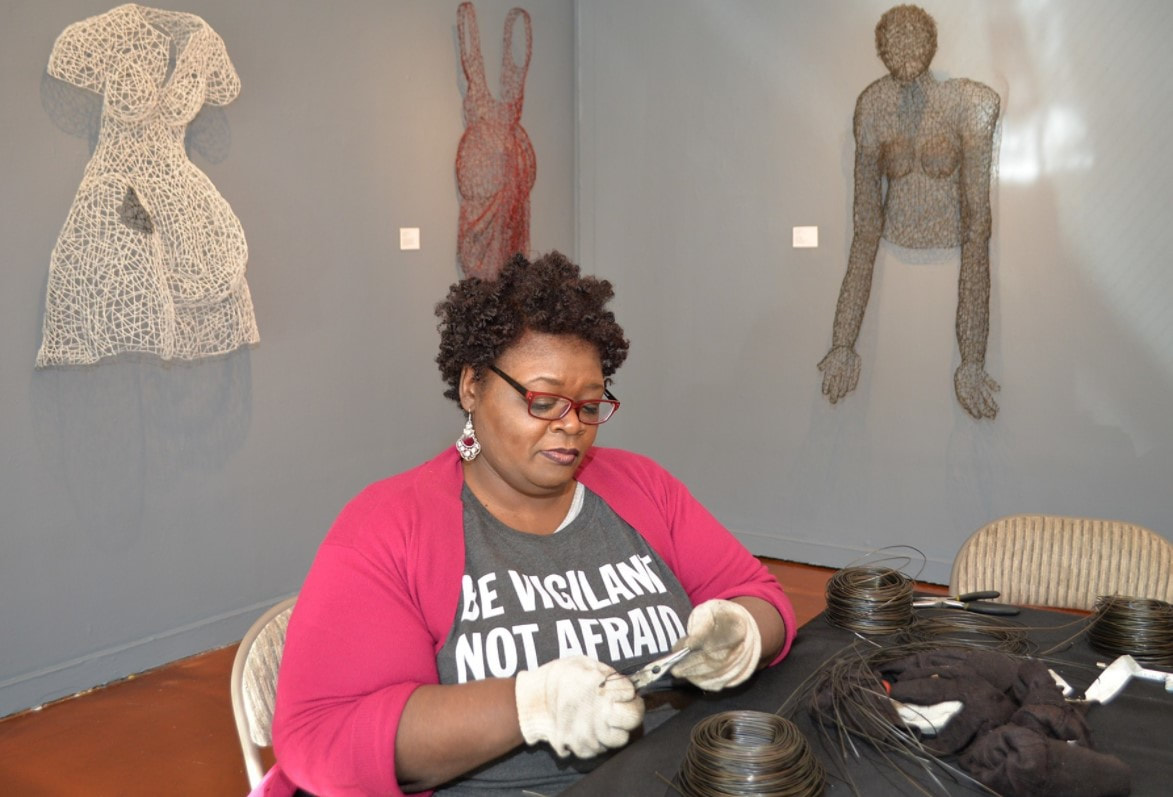 https://kristinemays.com/home.html
https://www.instagram.com/kristinemays/
​https://www.facebook.com/kristinemays.artist/
Artist Statement
As an artist I am very aware of the impermanence of life. With metal wire I have timelessly captured a fleeting moment that I hope will last for decades. My artwork points to the soul and spirit, transporting the viewer into another place. It's about reconnecting to a deeper purpose -- the soul and spirit of our lives. I transform hard rigid wire into soft flowing movement. I create the outer shell, the exterior of a human being, but provoke you to see what's within. Memories and the way we have loved one another far outweigh our status or possessions -- and yet sometimes a simple dress or a body in motion may trigger a memory from the past, allowing us to visit that which has imprinted our lives."

​Artist Bio
​Kristine Mays, a San Francisco native has been an exhibiting artist since 1993. She was the Grand Finale Winner in 2015 of the 5th Annual Bombay Sapphire Artisan Series National Competition. This competition not only provided an opportunity to exhibit her work at Art Basel Miami, but she had a solo exhibition at the Scope NYC Art Fair as well, and was also afforded a chance to collaborate on a large scale public mural. Her mural is on the side of the Boom Boom Room in San Francisco on Fillmore and Geary Streets. (It has large wire feathers placed among the portraits that adorn the walls, reflecting the fleeting existence of black jazz musicians in San Francisco.) In 2015 she also participated in the Hearts in San Francisco program, creating a large 400 pound heart for their annual public art installation. The heart spent a few weeks on display in Union Square before going to its final home upon purchase from AT&T.
In 2009, Kristine was a featured artist in the San Francisco Art Commission's "Art in Storefronts" pilot program, a project which transformed vacant storefronts and commercial corridors into a destination for contemporary art, bringing a new energy to the Bayview Hunters Point neighborhood. A participant in the San Francisco Open Studios program for over 20 years, Kristine has also served on the Board of Directors for ArtSpan-- the Producers of SF Open Studios and has participated on several of their committees. Kristine served as the 2011-2013 artist-in-residence at the Bayview Hunters Point Shipyard in San Francisco. She is a graduate of Lowell High School, received her Bachelor Degree in Arts Administration from DePaul University and has occasionally served as a grant review panelist through the San Francisco Arts Commission.
Seeking to create impact and change with her art, Kristine has participated in raising thousands of dollars for AIDS research through the sale of her work by collaborating with organizations like Visual Aid, the San Francisco Alliance Health Project and WE-Actx. Her work has received local and national press including mentions in the San Francisco Chronicle, New York Times, The New York Post, The Washington Post, Source Magazine, Artsy, and the interior design blog Apartment Therapy. She is represented by Simon Breitbard Fine Arts in SF, the Richard Beavers Gallery in Brooklyn and Zenith Gallery in Washington DC.
Kristine has participated in programming at the De Young Museum, Museum of African Diaspora (MoAD) and exhibited at the California African American Museum (CAAM) in Los Angeles, CA. Collectors of her work include an eclectic mix of people including Star Wars creator George Lucas and the dearly departed Peggy Cooper Cafritz (who amassed one of the country’s largest private collections of African-American art). Her work is displayed in many Bay Area homes and private collections throughout the USA. 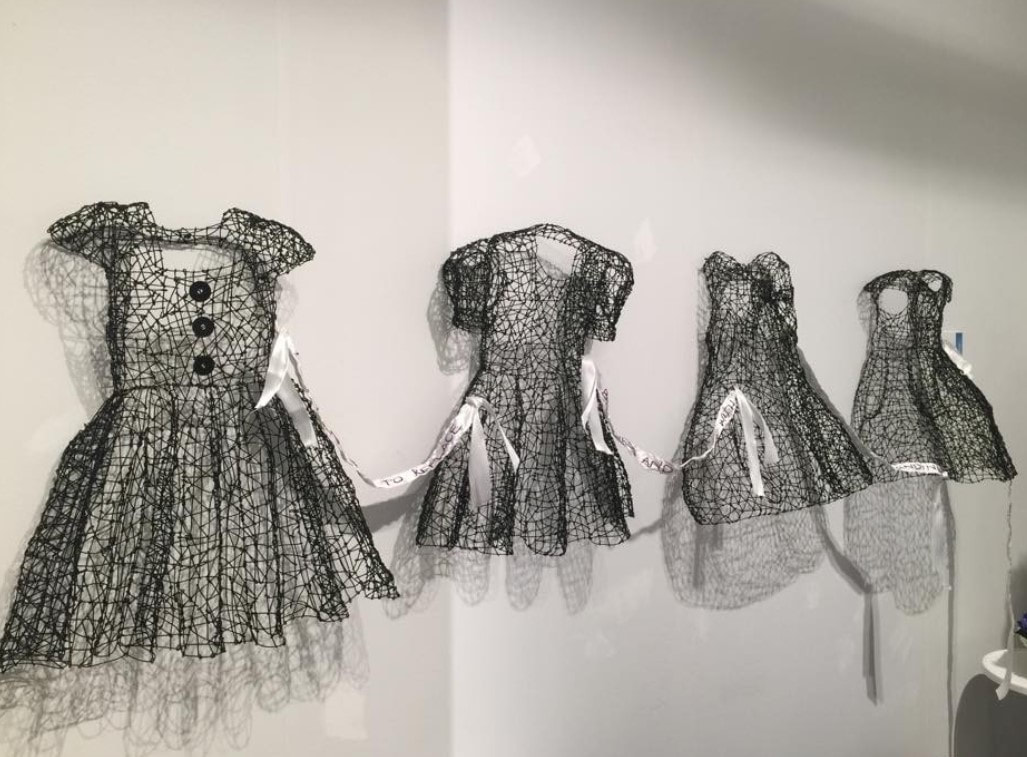 Four Souls of Birmingham
On Sunday, September 15, 1963, the 16th Street Baptist Church in Birmingham, Alabama, was bombed by four members of a Ku Klux Klan-affiliated racist group. Addie Mae Collins, Denise McNair, Carole Robertson and Cynthia Wesley, four African-American girls between the ages of 11 and 14 who had been attending the church's Sunday school, were killed in the blast.
​
The Birmingham church bombing occurred on September 15, 1963, when a bomb exploded before Sunday morning services at the 16th Street Baptist Church in Birmingham, Alabama—a church with a predominantly black congregation that also served as a meeting place for civil rights leaders. Four young girls were killed and many other people injured. Outrage over the incident and the violent clash between protesters and police that followed helped draw national attention to the hard-fought, often-dangerous struggle for civil rights for African Americans. 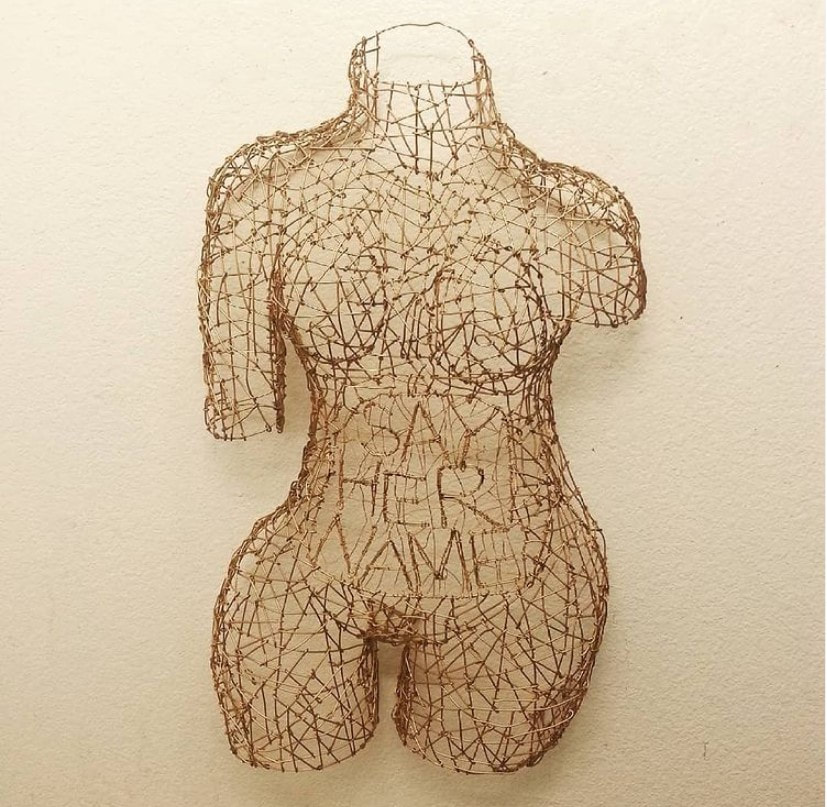 ​I woke up the other morning with the idea of what I was to create in my mind. This often happens to me when I am in the stages between sleep and waking. It comes as a direction, sometimes a command. "This is what you are to create." I sometimes wrestle with the ideas, trying to compromise with God yet he usually stands firm in the direction and peace does not come until I complete it. So I sculpted and cried. I cried because I knew this would not be the last woman whose name we will intentionally remember. I cried because a woman should not have to feel threatened while trying to live their daily life. I cried at the fact that no one will call it for what it is -- domestic terrorism. Since when did it become hunting season on black bodies? I was going to ask, "Since when did it become hunting season on human beings?" yet I don't think we are always viewed as human. I have not forgotten that at one time Black people were 3/4 of a person, listed with the other property -- cattle, chickens, and hogs... In the midst of this present situation we must persevere and stand strong.

​Say her name. May her death not be in vain. 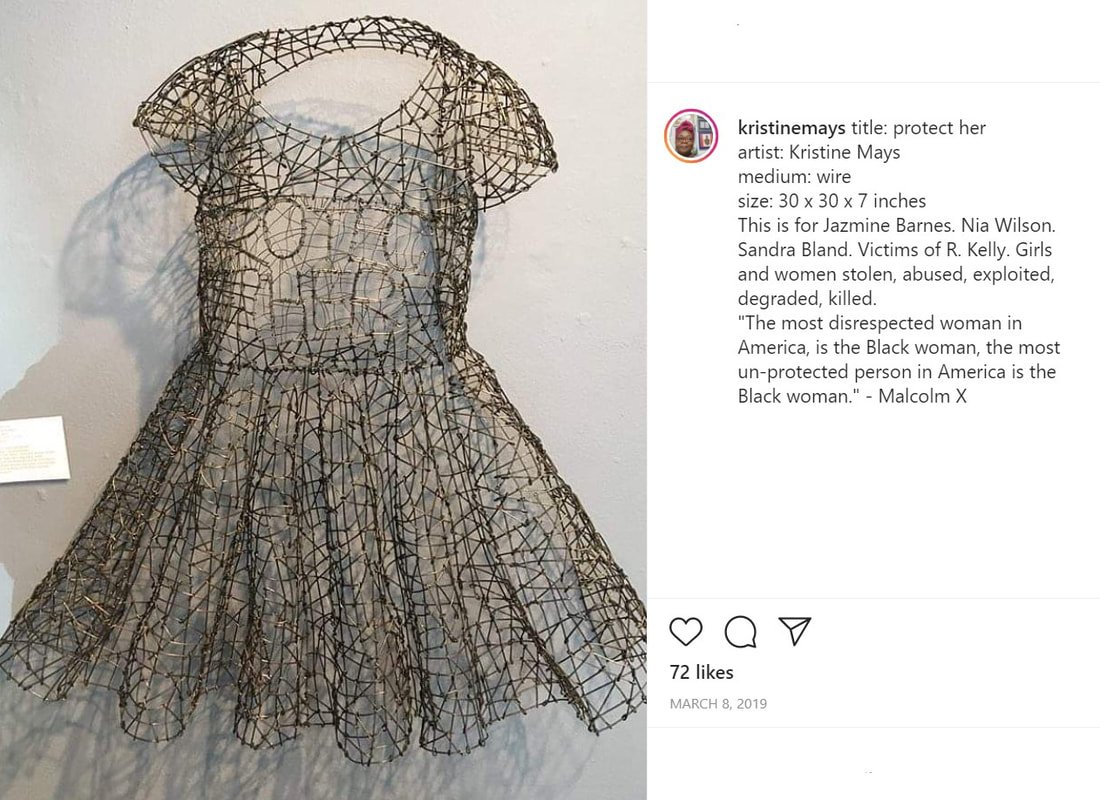 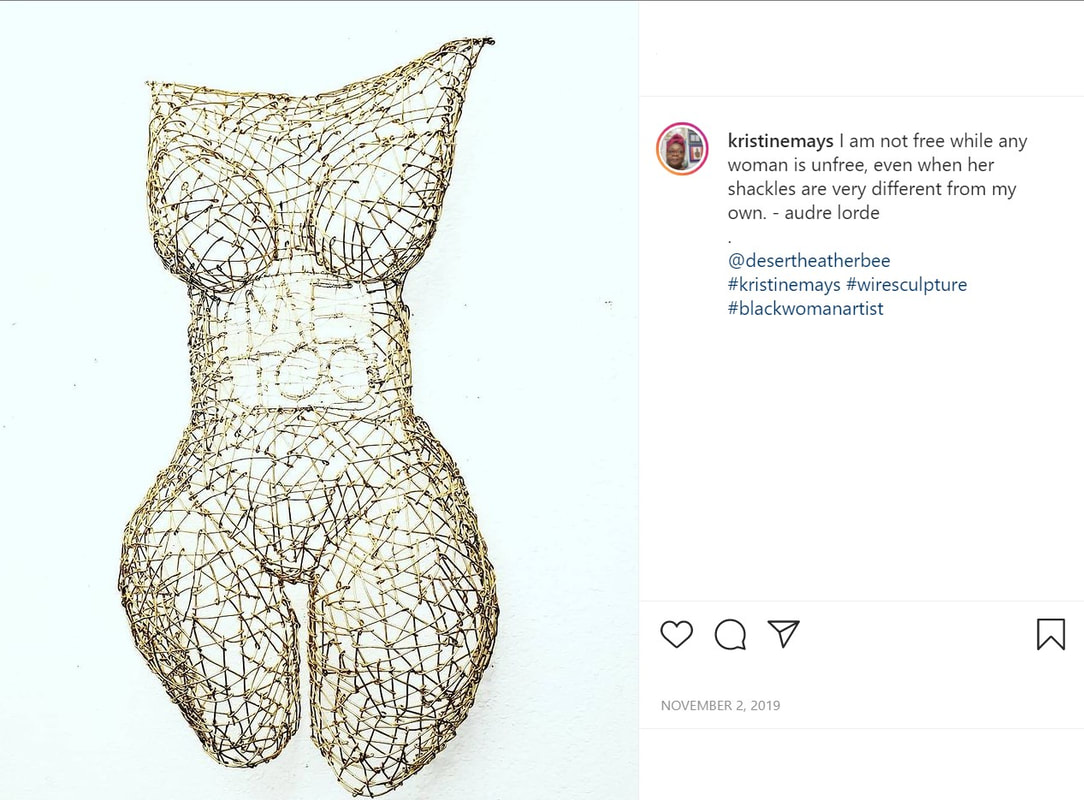 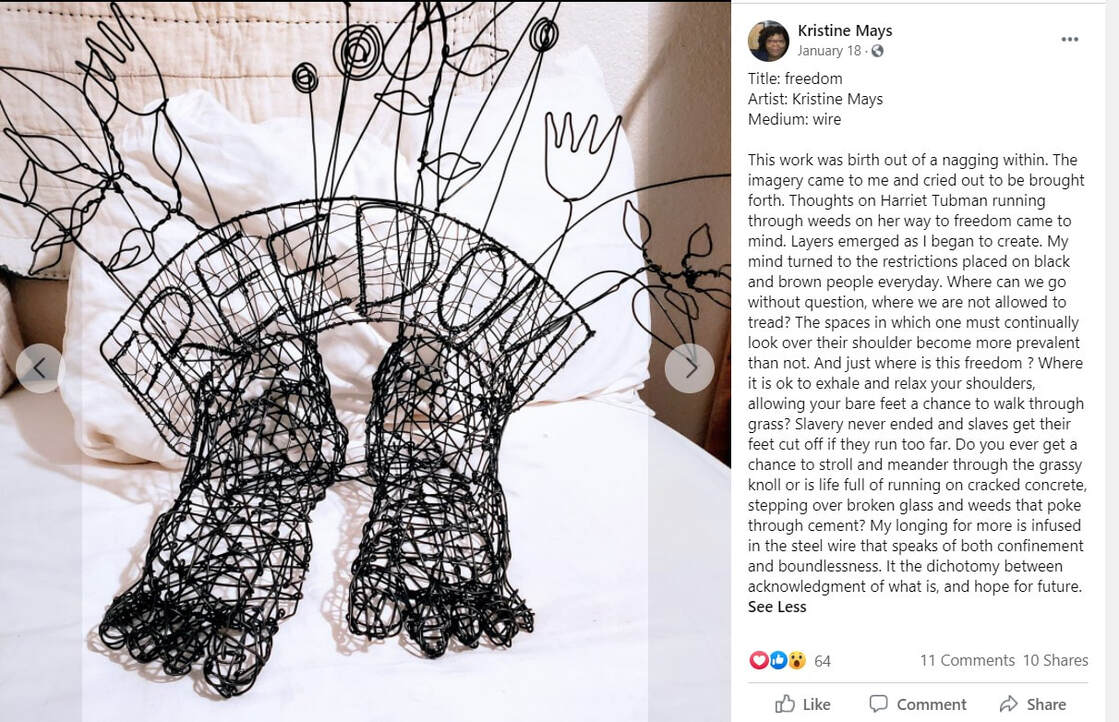 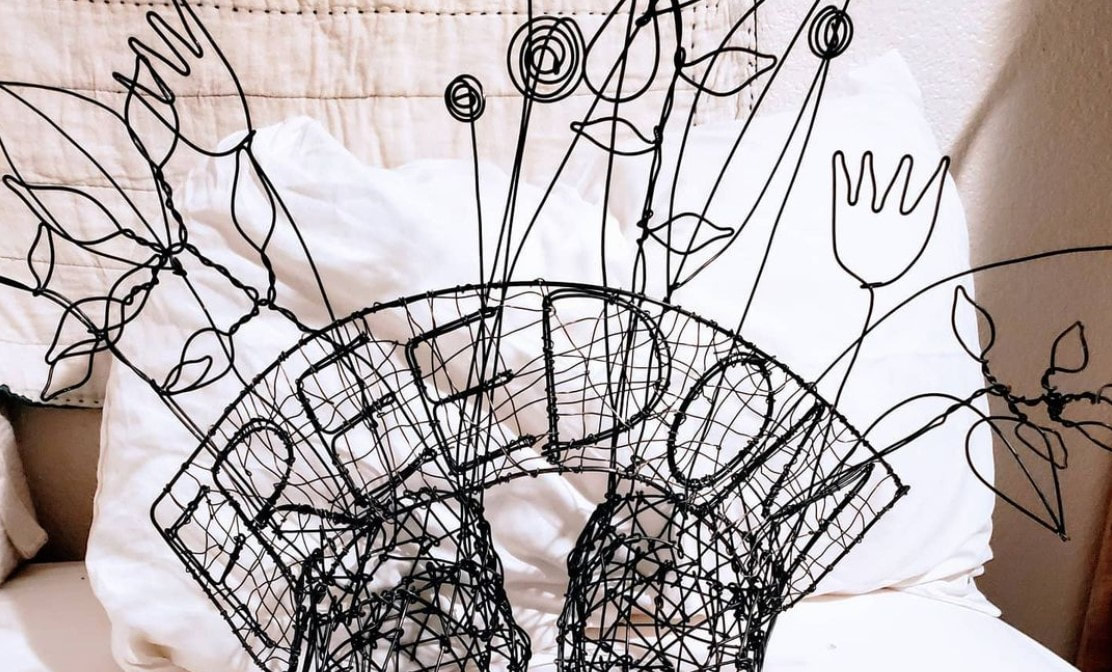 FREEDOM, detail
This work was birth out of a nagging within. The imagery came to me and cried out to be brought forth. Thoughts on Harriet Tubman running through weeds on her way to freedom came to mind. Layers emerged as I began to create. My mind turned to the restrictions placed on black and brown people everyday. Where can we go without question, where we are not allowed to tread? The spaces in which one must continually look over their shoulder become more prevalent than not. And just where is this freedom ? Where it is ok to exhale and relax your shoulders, allowing your bare feet a chance to walk through grass? Slavery never ended and slaves get their feet cut off if they run too far. Do you ever get a chance to stroll and meander through the grassy knoll or is life full of running on cracked concrete, stepping over broken glass and weeds that poke through cement? My longing for more is infused in the steel wire that speaks of both confinement and boundlessness. It the dichotomy between acknowledgment of what is, and hope for future. 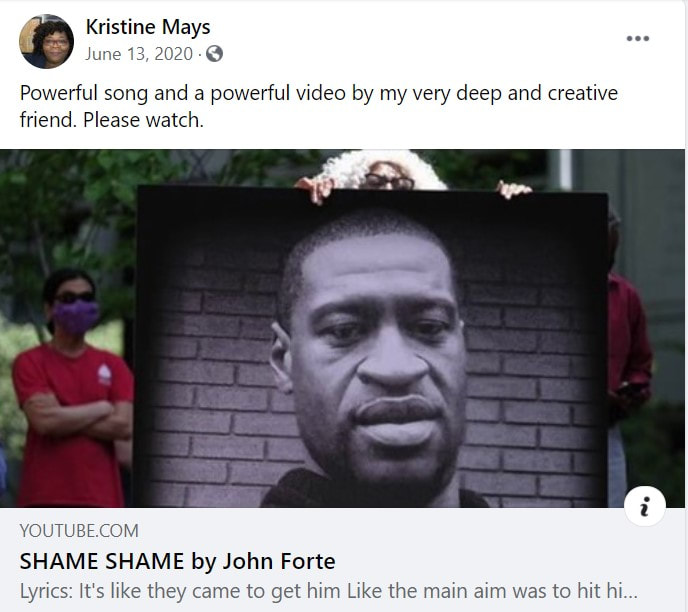 The Entanglement of Black Men in America 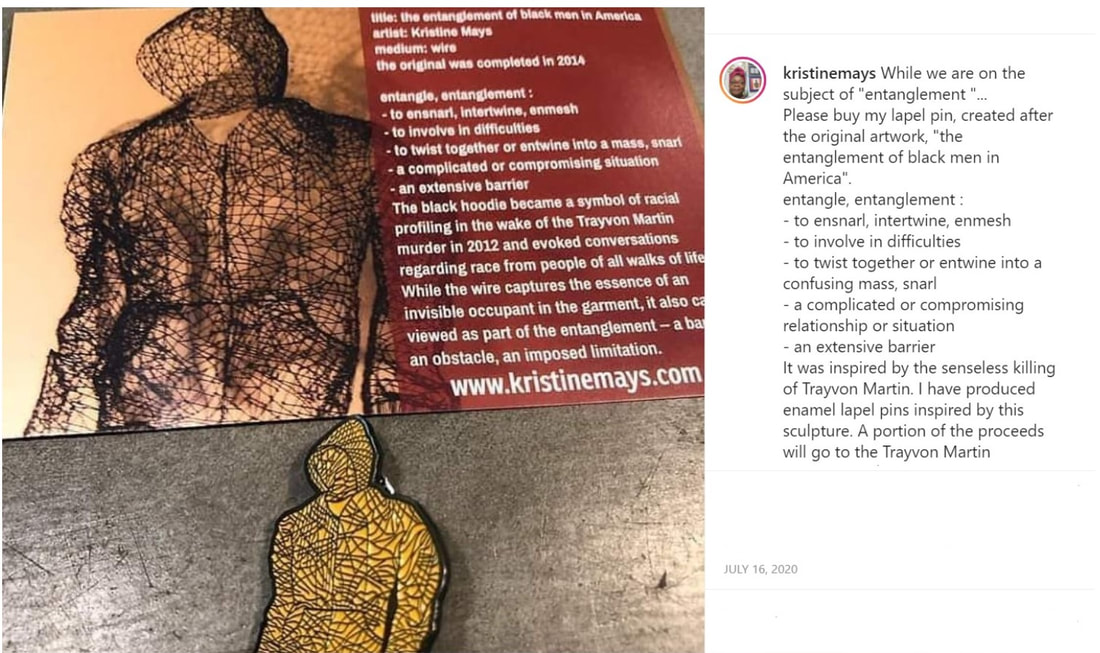 All Power to The People

Someday We'll All Be Free 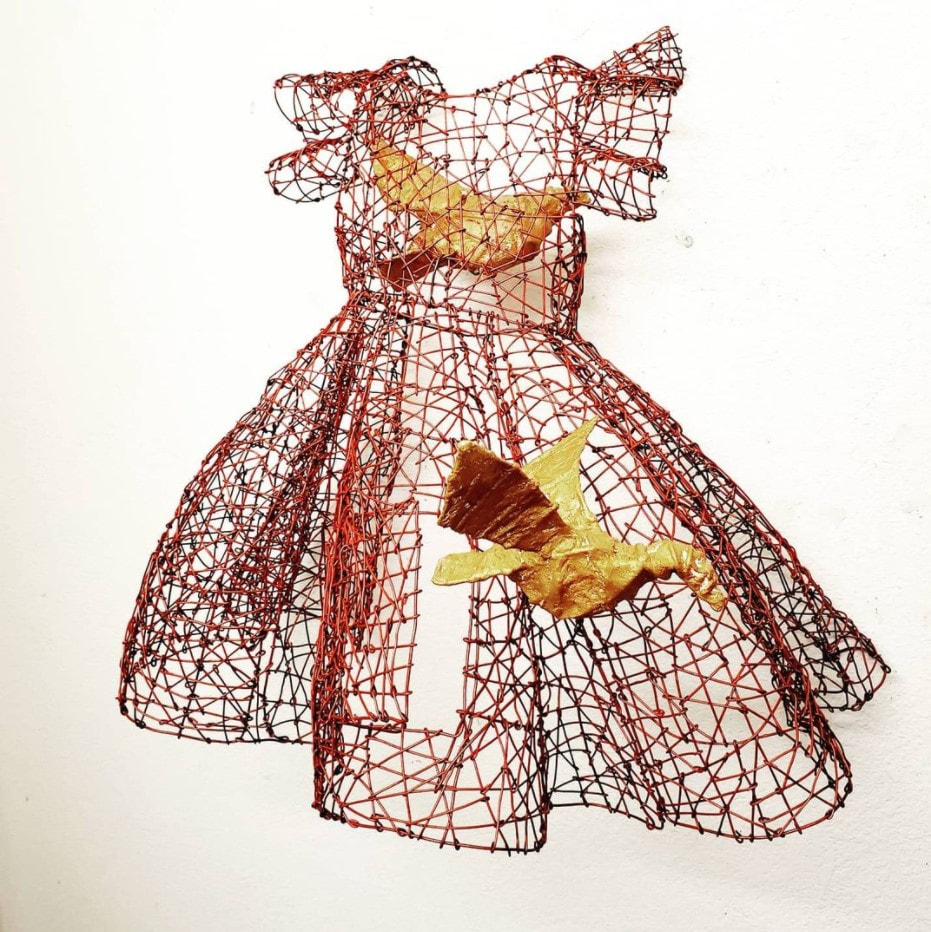 Put on Your Crown series. 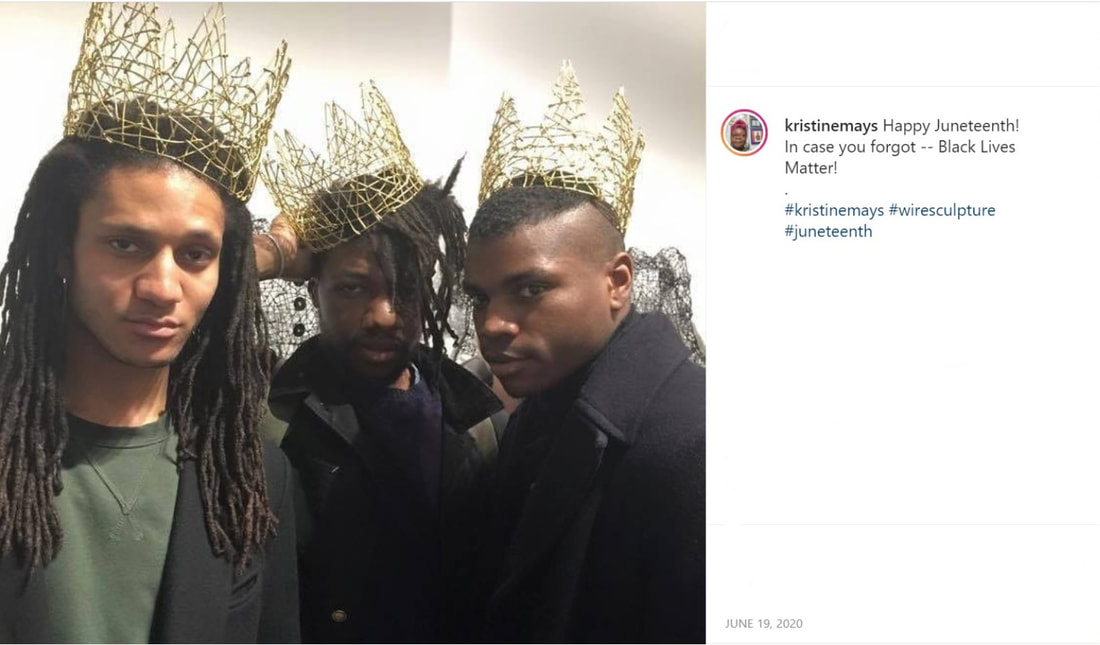