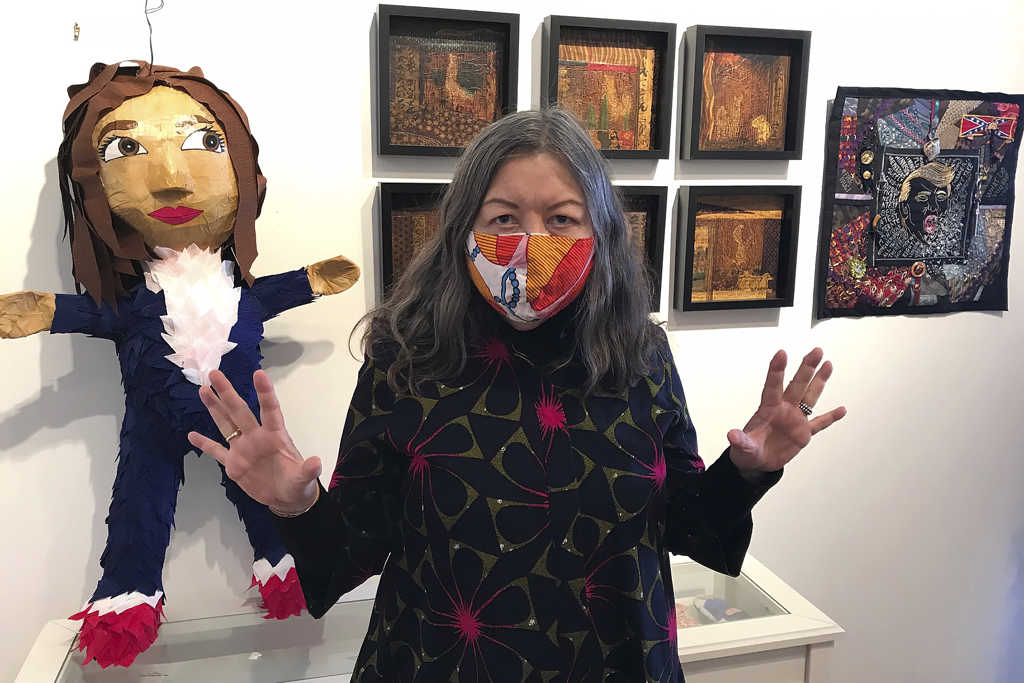 ​Artist Statement
​Since 2017 I have explored the themes of resistance and politics. Making art on these subjects helps me process the drama, conflict, outrage and turmoil in our country. ​

Artist Bio
I am a San Francisco-based artist working in mixed media and installation. My works explore taboos, beliefs and myths in Japanese and Western cultures. In my painted works, paper is combined with canvas and acrylics to create texture. Collages are created from scraps left over from other projects. Three-dimensional and installation pieces are made with fiber, paper from funeral stores and objects harvested from recycle centers. I am on the board of Northern California Women's Caucus for Art and Advisory Board of ArtSpan Art for City Youth. Together with partners Matthew Frederick, Stephen Wagner and Michael Yochum, I founded Arc Studios & Gallery in 2009.

From September 1, 2020 through January 20, 2021, I created a collage a day on 4x6 inch repurposed postcards. The subject matter was partisan politics and the name-calling that became part of our daily lives under Donald Trump. Nicknames and tag lines are based on internet research. Characters alternated between one side of the partisan divide and the other. There are 142 collages in this series. 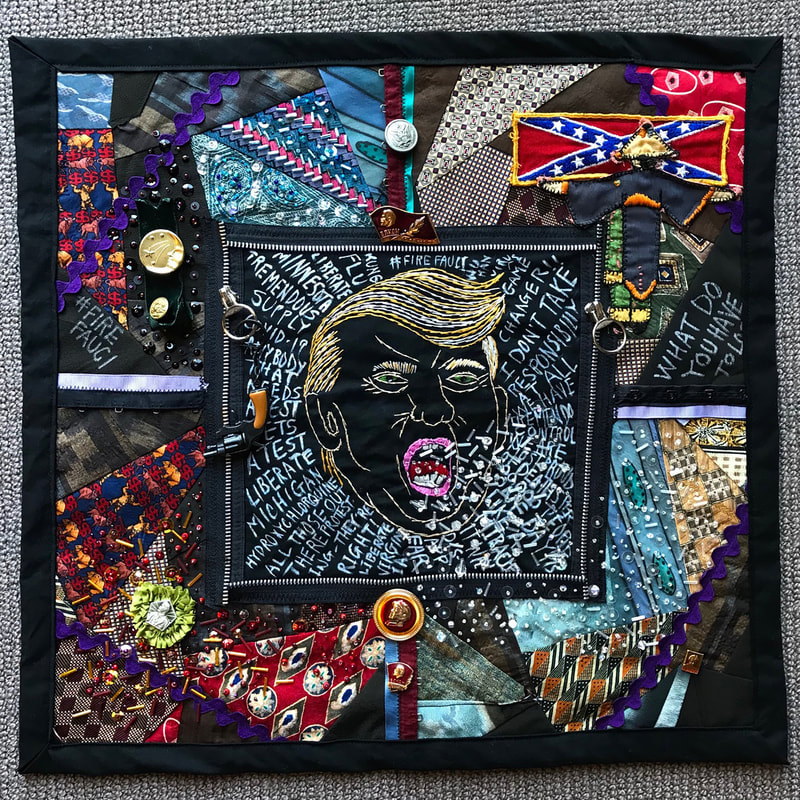 The words that come out of our President’s mouth are both laughable and frightening. For those who trust science, he speaks nonsense, but for those who oppose logic and education, his words ring true. I want to draw the audience to the beauty of the piece – the bugle beads and spangles that make the surface sparkle. They also represent the invisible scattering of the coronavirus through spittle and speech.  I cut up beautiful silk neckties, symbols of the Establishment, and arranged them chaotically, to represent today's economy. I used broken pieces of women’s garments:  zippers, snaps and fasteners to represent how little women matter to Trump outside of the bedroom. I added reprehensible, patriotic and religious symbols such as communist badges, military buttons, hand gun, Confederate flag, cross, devil worship symbols and a Chinaman patch to show how Trump indiscriminately uses everything to his benefit. While documenting some of his memorable COVID statements, I began to understand his disquieting purpose: to inciting his base to rise up and create civil disorder. It will happen if he loses the election. We must be ready.

At a Young and Tender Age 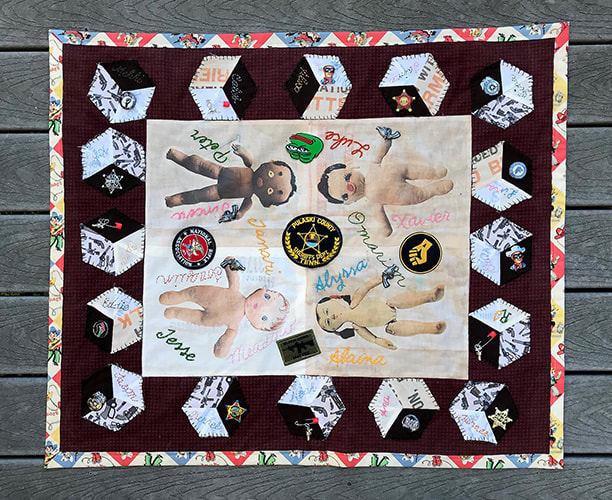 In the United States we are given guns to play with at a young and tender age. Gunplay embeds our imagination through songs and stories and moving pictures. Through peer pressure we learn to thrill to our fear, playing at stalking, chasing, shooting. Death is made all right by resurrecting the dead when the game is finished. Our play distorts what is right and what is wrong, what is real and what is not.
Quilt with tumbling blocks, images of rag dolls, toy badges, patches, names of children killed by gun violence. 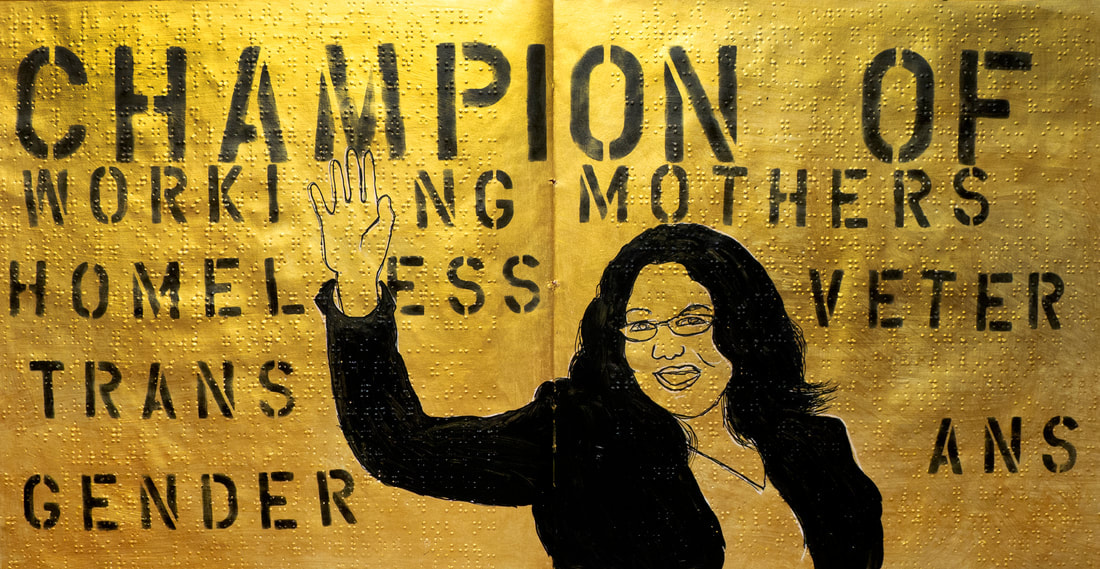 ​Ladda Tammy Duckworth, Senator from Illinois, is one of my heroes. She has had a challenging life: claiming her identity as a mixed race person, living in poverty and on government assistance, being severely wounded as a helicopter pilot, going through a brutal rehabilitation regimen, confronting racism while running for national office, dealing with infertility and giving birth to two babies through in-vitro fertilization at age 47 and 50, and continuing to work as a Senator while nursing a baby.  These struggles have not turned her inward and bitter but outward and determined. In each of her struggles, she has both accepted help and found ways to pay back by helping others in similar situations. Duckworth represents the demographics of what our country is becoming today: mixed race, non-Caucasian, beneficiary of government assistance and realizing her American Dream because of it, hard-working and determined to work through Congress to better the lives of military veterans, working mothers, victims of gun violence, and transgender people, among other things. She is what America already is and continues to become: a representative of the demographic that puts fear into the hearts of politicians like Mitch McConnell, Lindsay Graham and Donald J. Trump. 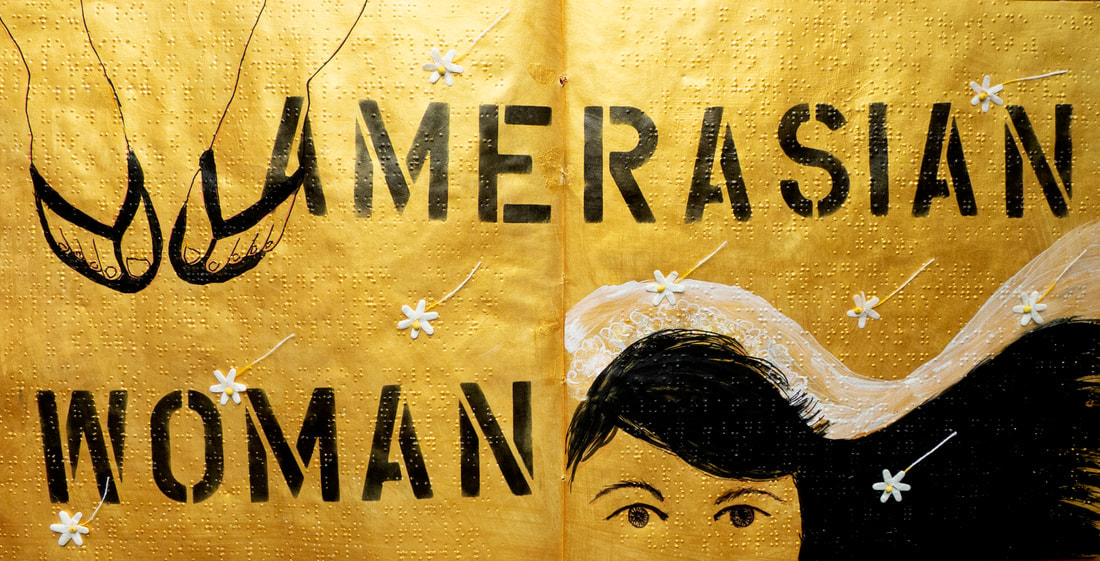 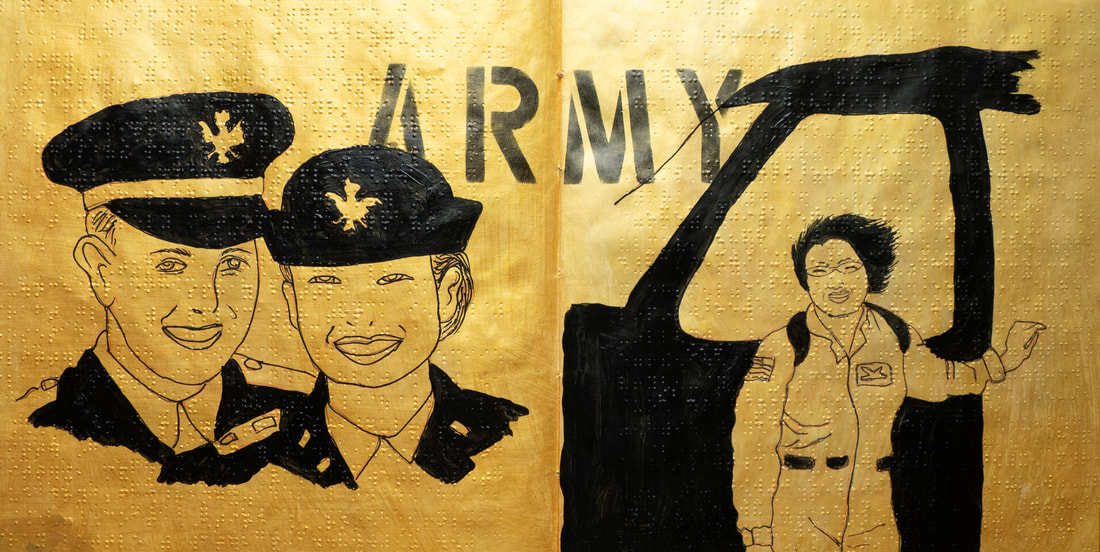 This Braille book explores "passages" in two forms: the shuffling of White House personnel in alarming succession and verbal and written passages associated with these individuals. I selected words that best fit the characters, whether Senate testimony, on-the-record media interviews, declarations of Trump loyalty, fake media coverage or tweets. ​ 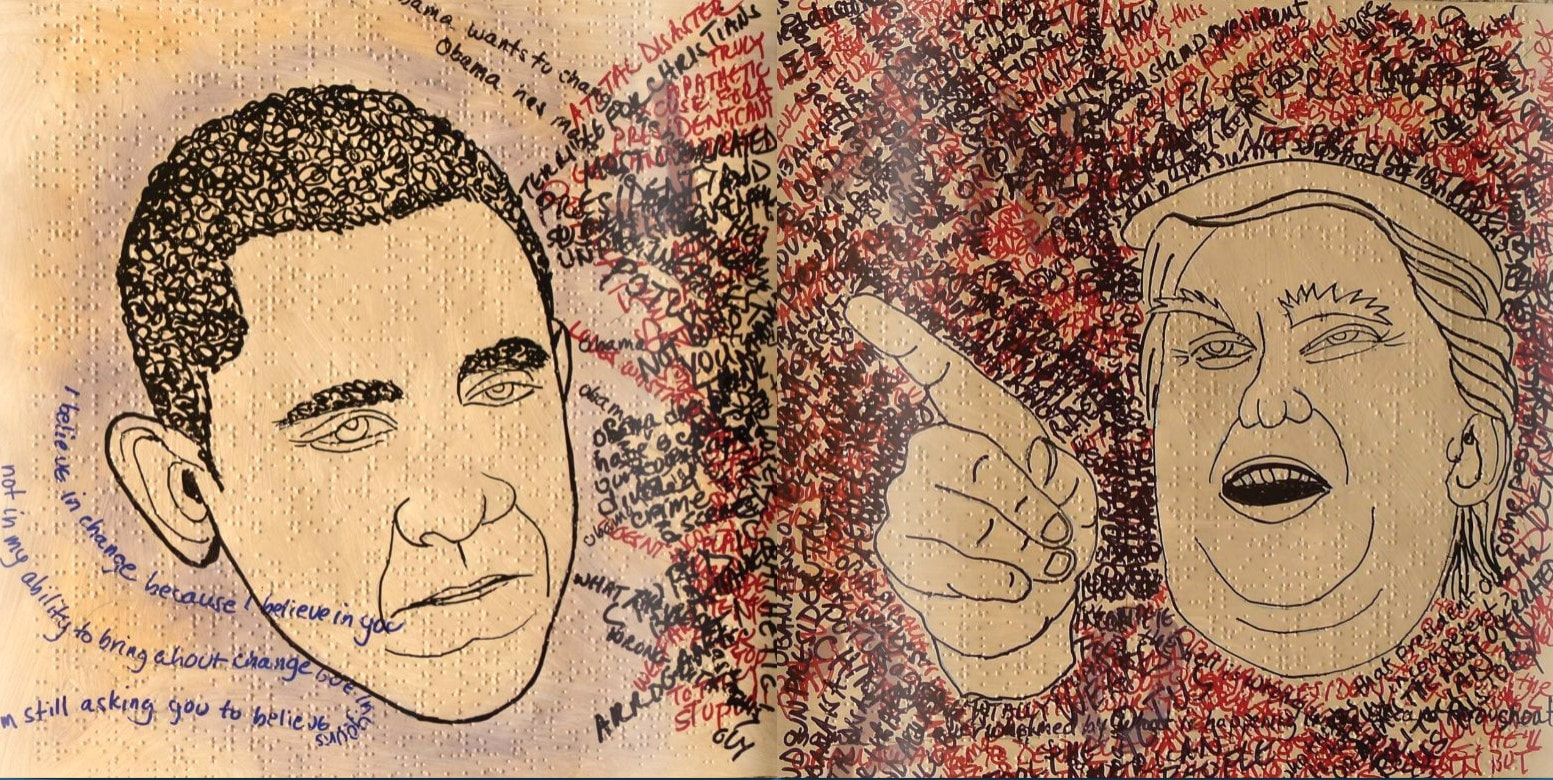